Data for the Price Path Model (PPM) used for the analysis came from Eskom’s Financial Statements and Revenue Application of April 2017, and output of the scenarios from technical models.

The PPM simulates the regulatory pricing methodology for South Africa. The model forecasts Eskom’s total costs, including generation, transmission, purchases and distribution. The PPM does not forecast municipal costs.

Key assumptions in the Model can be summarised as follows:

The table below shows the comparative tariff projections for each of the five input scenarios and the cumulative difference between the scenarios11 by 2030. 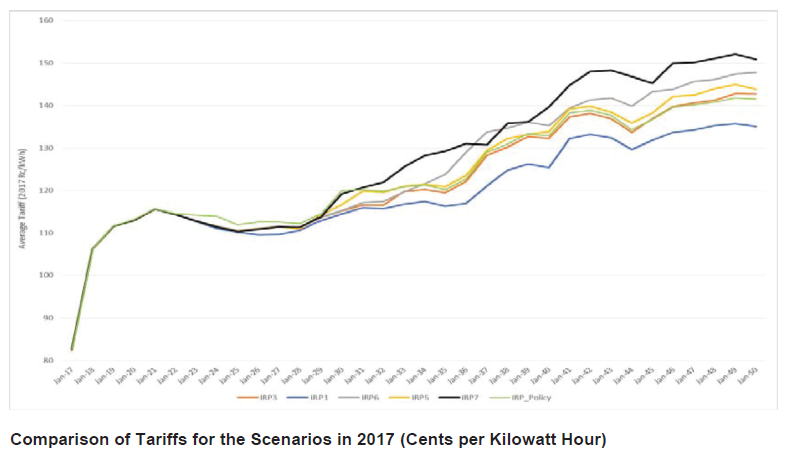 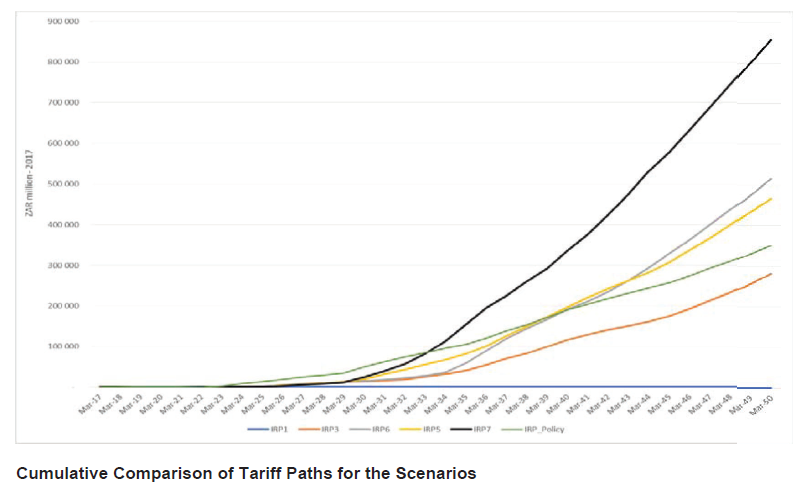 There is a marginal difference in the projected price path for the period up to 2030. This is to be expected, since technical analysis resulted in the observation that the energy and capacity mix for the period differs marginally between the five scenarios.

Beyond 2030, and driven by the difference in the energy and capacity mix, the price paths are significantly different. The scenario where annual build limits on RE is removed (IRP1) provides the lower-tariff path, with the scenario where carbon budget as emission mitigation strategy is imposed and market-linked gas prices are assumed (IRP7) resulting in the highest tariff path. A further observation was that the adoption of carbon budget as emission mitigation strategy, with the targets as currently suggested, results in the tariff path of this scenario being the second highest by 2050 (see IRP6).

There is therefore no difference in tariff path for the different scenarios up to 2030, while the choice of technologies and their associated costs, taking emission mitigation requirements and capacity building into account, will drive the price path beyond 2030. Cumulative by 2030 deviation from the least cost case (IRP1) will results in additional costs to the consumer.

Hence, it makes no difference for this version of the IRP Update which scenario is adopted up to 2030. The huge difference between scenarios beyond 2030 will, however, make it necessary to undertake a detailed energy path study that will inform a next update of the IRP.