Installed capacity assumed in the IRP Update includes both Eskom and private generation (generation for own use and municipal generation) as filed and licensed with NERSA.

A list of Eskom and private and municipal generators, as licensed with NERSA, is included in Appendix A.

In line with the planned capacity in the promulgated IRP 2010–2030 and in accordance with Section 34 of the Electricity Regulation Act No. 4 of 2006, the Minister of Energy has, to date, determined that 39 730 MW of new generation capacity must be developed.

For the IRP Update analysis, the remaining units at Medupi and Kusile were assumed to come on line as indicated in Table 3.

The existing Eskom’s generation plant energy availability factor (EAF) was assumed to be averaging 86% in the promulgated IRP 2010–2030. The actual EAF at the time was averaging 85%. Since then, Eskom’s EAF declined steadily to a low average of 71% in the 2015/16 financial year before recovering to average around 77.% in the 2016/17 financial year. Information as at January 2018 indicates that EAF has regressed further to levels below 70%. This low EAF was the reason for constrained capacity early in December 2018 and January 2019 that resulted in load shedding.

Eskom’s existing generation plant will still dominate the South African electricity installed capacity for the foreseeable future. The current and future performance of these Eskom plants is critical for security of supply and heavily influences the capacity planned to be introduced under the IRP.

As part of the comments process on the draft IRP 2018, Eskom submitted revised system availability projections per power station. The submission contains two scenarios of which scenario 1 and scenario 2 project an average EAF of 80% by 2030 and 75% by 2030, respectively.

Existing generation plant life is a major consideration in the IRP as it will affect supply and demand balance. The IRP considers both Eskom and non-Eskom plants (municipal and large private sector plants) in this regard.

Eskom coal plants were designed and built for a 50-year life, which falls within the 2050 study period of the IRP 2018 update.

Eskom has also submitted a revised plant end of design life (decommissioning) plan. This submission brings forward the shutdown of some units at Grootvlei, Komati and Hendrina. 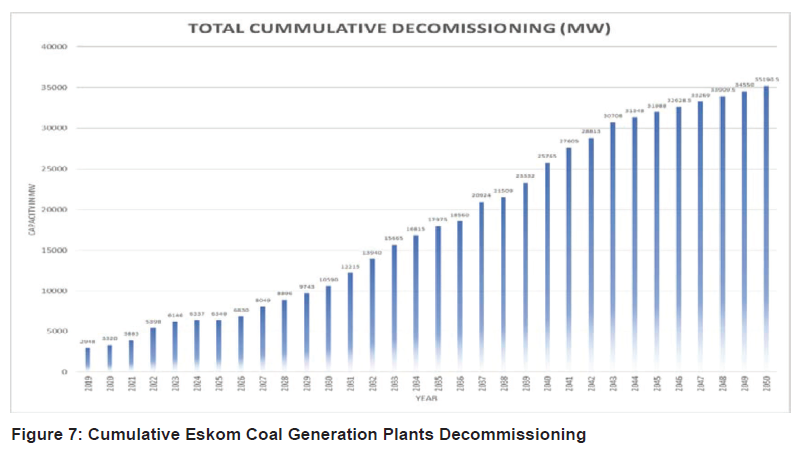 The socio economic impact of the decommissioning of these Eskom plants has not been quantified or included in this IRP.

It is also expected that by year 2024, 1 800 MW of nuclear power generation (Koeberg) will reach end-of-life. Eskom has initiated preparations and processes to extend the life of this plant to 2044, subject to the necessary regulatory approvals. In light of the projected lower EAF for Eskom coal power plants, the IRP plan is based on the assumption that Koeberg plant life would be extended to 2044.

Mitigation of the risks associated with the adopted assumption is included in the risk section of this report.

In 2014 Eskom applied for postponement of the date for compliance and permission in this regard was granted for a period not exceeding 5 years. To date, Grootvlei is the only station that has been brought to compliance and this failure to undertake abatement retrofits is likely to result in non-compliant plants becoming unavailable for production from year 2020, unless further postponement is granted. Eskom is in the process of applying for further postponement in line the provisions of the law.

In light of projected lower EAF, the assumption adopted in the IRP is that NEMA-affected Eskom coal plant will remain available for production.

8 Committed refers to the capacity commissioned or procured and officially announced by the Minister of Energy.