As part of the development of the promulgated IRP 2010–2030, the DMRE, through Eskom, engaged the Electric Power Research Institute7 (EPRI) in 2010 and 2012 to provide technology data for new power plants that would be included in the IRP. That resulted in an EPRI report, which was revised in 2015, taking into account technical updates of the cost and performance of technologies, market-factor influences and additional technology cases.

The EPRI report incorporates cost and performance data for a number of power- generation technologies applicable to South African conditions and environment. It presents the capital costs; operating and maintenance (O&M) costs; and performance data, as well as a comprehensive discussion and description of each technology.

A detailed EPRI technology cost assumptions report can be downloaded from the DMRE website (http://www.energy.gov.za/files/irp_frame.html).

While EPRI provided costs for PV and Wind, the costs adopted in the plan for these technologies were from the South African REIPPP. The nuclear technology costs are based on the DMRE-commissioned study (referred to as the Ingerop study). The study expanded the analysis by EPRI to include a technology cost analysis from projects in the East (Asia). A copy of the Ingerop Report can be downloaded from the DMRE website (http://www.energy.gov.za/files/irp_frame.html).

Information on combined cycle gas engine cost is based on inputs obtained during the public consultations process. This can be can be downloaded from the DMRE website (http://www.energy.gov.za/files/irp_frame.html).

For economic parameters, the following assumptions are applied:

Learning rates used in the promulgated IRP 2010–2030 are maintained in the IRP update, with PV and wind technology learning rates adjusted to reflect the decline in prices experienced in South Africa already. Battery learning rates are obtained from the Lazard’s Levelized Cost Of Storage Analysis—Version 3.0. 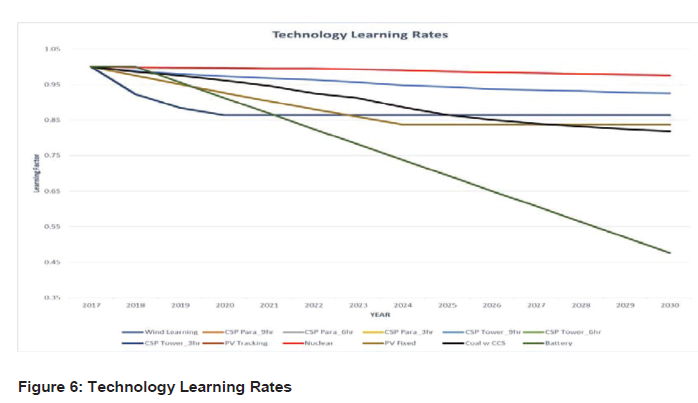 With regard to externality costs associated with emissions, the IRP update considers the negative externalities-related air pollution caused by pollutants such as nitrogen oxides (NOx), sulphur oxides (SOx), particulate matter (PM) and mercury (Hg). These externality costs reflect the cost to society because of the activities of a third party resulting in social, health, environmental, degradation or other costs.

For all these externalities the cost-of-damage approach was used to estimate the externality costs. The overall cost to society is defined as the sum of the imputed monetary value of costs to all parties involved. The costs are indicated Table 2. The costs associated with carbon dioxide (CO2) are not included as the CO2 emissions constraint imposed already indirectly imposes the penalties or additional costs. The technical model achieves this by applying the CO2 constraints and choosing cleaner electricity generation options even if they are options that are more expensive.

7 EPRI is an independent, non-profit organization that conducts research and development related to the generation, delivery and use of electricity to help address challenges in electricity, including reliability, efficiency, affordability, health, safety and the environment.