Electricity demand as projected in the promulgated IRP 2010–2030 did not materialise due to a number of factors which resulted in lower demand. These include, among others, lower economic growth; improved energy efficiency by large consumers to cushion against rising tariffs; fuel switching to liquefied petroleum gas (LPG) for cooking and heating; fuel switching for hot water heating by households; and the closing down or relocation to other countries of some of the energy intensive industry.

Reported Gross Domestic Product (GDP) for the period 2010–2016 was significantly lower than the GDP projections assumed in the promulgated IRP 2010–2030. This is depicted in Figure 2.

The compound average growth rate for the years 2010 to 2016 was 2,05%. This lower GDP growth compared with the expectations in 2010 had an impact on the resulting electricity demand as depicted in Figure 3.

The actual net electricity energy sent-out for the country declined at an average compound rate of -0,6% over the past years. That was in stark contrast with the expectation of an average growth rate of 3,0% in the promulgated IRP 2010–2030. The result was that the actual net sent-out electricity in 2016 was at 244TWh in comparison with the expected 296TWh (18% difference).

The underlying causes of the reduced electricity demand were many-sided, including:

Figure 4 also points to possible decoupling of GDP growth from electricity intensity, which generally indicates a change in the structure of the economy. 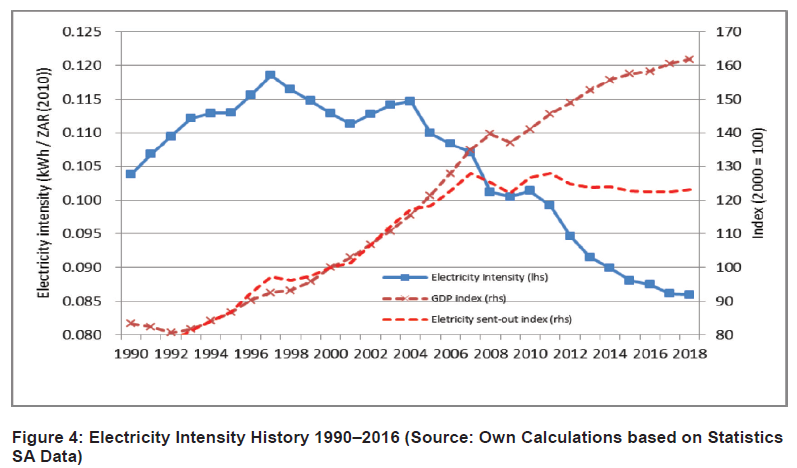 The expected electricity demand as forecasted in the promulgated IRP 2010–2030 did therefore not materialise and the forecast was updated accordingly to reflect this.

The electricity demand forecast was developed using statistical models. The models are data-driven and based on historical quantitative patterns and relationships. Historical data on electricity consumption was key and information in this regard was obtained from various sources in the public domain. Overall consistency between sources was maintained by ensuring sector breakdowns corresponded with totals from Statistics SA data.

Figure 5 below depicts the total energy demand forecast as contained in the demand forecast report but adjusted to reflect the lower actual year-2018 demand as a starting point. The 2018 actual recorded demand is about a 3 percent lower than what was assumed in the draft IRP 2018. 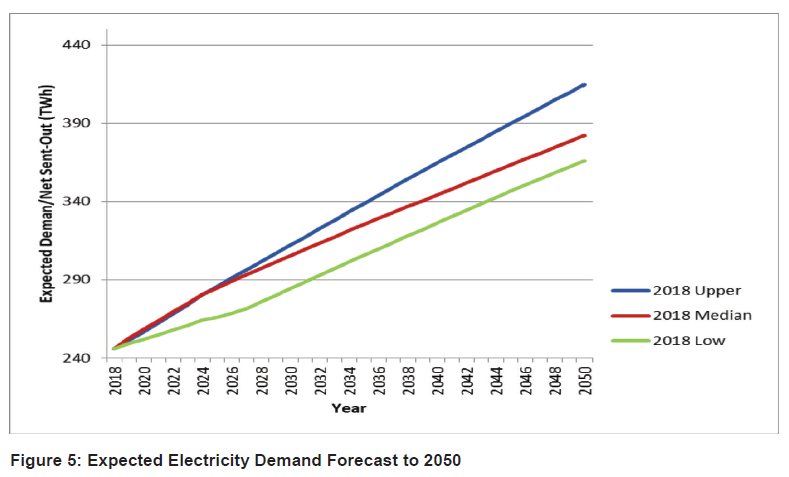 The upper forecast3 is based on an average 3.18% annual GDP growth, but assumed the current economic sectoral structure remained. This forecast resulted in an average annual electricity demand growth of 2.0% by 2030 and 1.66% by 2050.

The lower forecast5 had a 1.33% GDP growth to 2030, which resulted in a 1.21% average annual electricity demand growth by 2030 and 1.24% by 2050. The lower forecast assumed electricity intensity initially increased before dropping all the way to 2050. In developing the forecast, the main assumption was that mining output would continue to grow while other sectors of the economy would suffer as a result of low investment. This scenario was developed when the country faced possible downgrading decisions by the rating agencies.

A detailed demand forecast assumptions report, including electricity intensity, can be downloaded from the DMRE website (http://www.energy.gov.za/files/irp_frame.html). Comments on the limitations of the forecasting methodology based on historical relationships as used in this IRP have been noted and will be considered for future enhancement of the forecast for IRP updates.

Equally, there is an increasing use of LPG for cooking and space heating that will impact both energy (kWh) and peak demand (kW). In line with municipal bylaws and building codes, new housing developments are installing solar water heaters in the place of full electric geysers. Voluntarily, consumers are also increasingly replacing electric geysers with solar water heaters to reduce their electricity bills.

These developments impact on overall electricity demand and intensity and must therefore be considered when projecting future demand and supply of electricity.

Due to the limited data at present and for the purpose of this IRP Update, these developments were not simulated as standalone scenarios, but considered to be covered in the low-demand scenario. The assumption was that the impact of these would be lower demand in relation to the median forecast demand projection hence the projected capacity was not discounted from the forecast.

3 The moderate forecast in its detailed forecast report.

4 The high less intense forecast in its detailed forecast report.

5 The junk status forecast in its detailed forecast report