The IRP update process undertaken is depicted in Figure 1 below. The update process started with the development and compilation of input assumptions. Following public consultations on the assumptions, various supply and demand balancing scenarios were modelled, simulated and analysed; this process culminated in the production of the draft IRP 2018. In August 2018 and following Cabinet approval, the Draft IRP 2018 report was published for public comment for a period of 60 days. 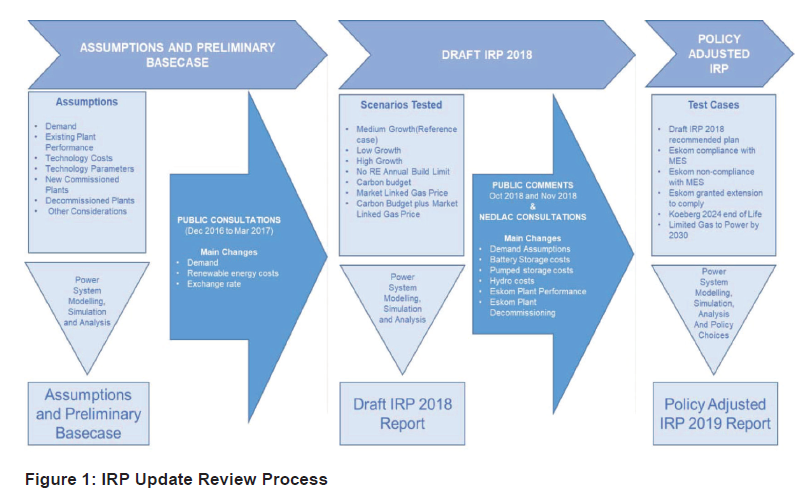 As with the consultations on the IRP assumptions and the preliminary base case, submissions from the public regarding the draft IRP 2018 public varied from opinion statements to substantive inputs with supporting data. The number of submissions received was 5 929, of which 242 were substantive comments inclusive of discussions and at times supporting facts, data or references.

The public mostly welcomed the recommended least-cost electricity supply plan while advocating for the energy mix in line with the NDP and the IRP 2010–2030.

Key issues raised in the comments included among others, the assumptions regarding demand forecast; a substantial number of the comments questioned the projected growth in demand in the context of declining electricity intensity, low economic growth projections and increasing own generation installations made possible by alternative energy technology advancements. Some submissions made the case for a higher demand projection arguing that demand is supressed by limited generation capacity and that the availability of excess capacity will unlock investment and therefore lead to electricity demand increase.

Concerns and risks were also raised about the capacity provided for and practicality of gas to power in the recommended plan and the risks it poses since South Africa does not currently have adequate gas infrastructure.

As part of the comments process, Eskom submitted revised system availability projections, a revised end of design life (plant shutdown) schedule and a schedule indicating their planned compliance with minimum emissions standards as included in Appendix A. Eskom’s existing generation plant dominates installed generation capacity. The current and future performance of these generation plants is critical for security of supply and heavily influences the planned capacity in the IRP.

Concerning the recommended published draft IRP 2018, key issues raised include, the extent of the energy mix, the exclusion of new nuclear capacity before year 2030 and deviation from the IRP 2010-2030. Concerns were also raised about the practical implementation aspects and the risks associated with gas to power, taking into account the extent of the capacity recommended in the plan.

The annual allocation for distributed generation (for projects between 1MW and 10MW) was said to be too low and the proposal was that it should be increased to take into account the requests for deviation from the IRP already received by the Department of Mineral Resources and Energy.

These comments have been considered and the details are included as part of the summary report on comments and how they are treated (see Appendix B).

The next section details the key assumptions after taking into consideration inputs from the public.